One word can be used to sum up the 365 island archipelago of San Blas – paradise.

It was a little over our budget so we spent a while considering whether to go for this trip. But after reading review after review of people talking about how incredible this place is, with one man saying it was “like stepping into a screensaver” we decided it was unmissable.

Which company to choose for San Blas

We looked into the different tour companies and eventually decided on Cacique Cruiser – a company with good reviews and great communication. We were able to talk with their staff via online chat and then WhatsApp to confirm details, and complete our booking.When we were picked up at 5am on the first day (yes, 5am) we were in a car with people who had booked with other tour companies, as there seems to be a policy on sharing drivers. Once we arrived at the port, we were introduced to one of the guides – Mel who directed us on to the correct boat. Once on the boat we met Eric, our guide for the island tours.There was actually a small mix up with the tour as they accidentally mixed us up with people on the El Original tour, but this was amended swiftly by Eric and we didn’t lose any time. We also had some confusion on our final day when the staff at the island we were staying on didn’t realise we had already paid for our lunch, but again this was resolved quickly by Eric and Mel when they came to pick us up.Just a note – although the guides were very friendly, they didn’t do much more than accompany us on the boats between islands. There was no spiel about the places we were visiting, or additional information. They also don’t actually stay with you on the island on the Del Sol Tour (I’m unsure about the other options), so once they’re gone you have to direct queries to the locals who own the cabins. It was very much a transportation and booking service so don’t expect too much of the island tours themselves! 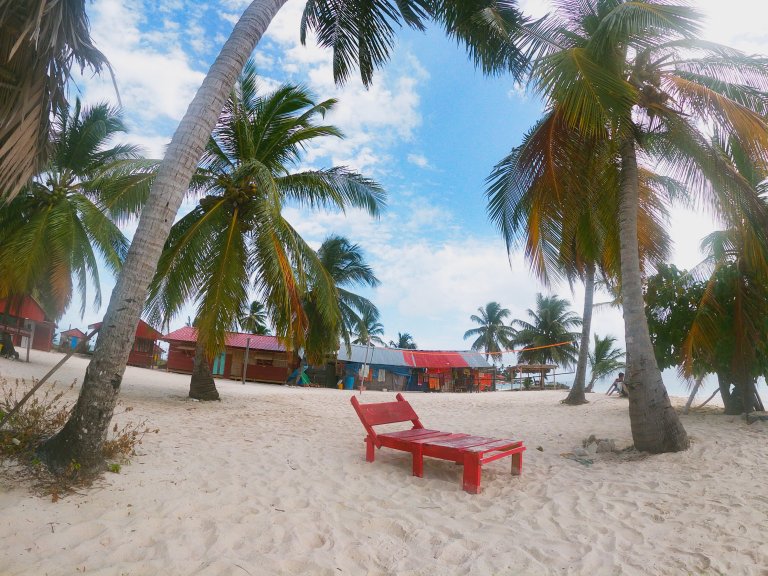 How much does a San Blas trip cost?

We went on the Del Sol trip which meant we stayed on Isla Diablo, and visited two others. To make the most of our trip we added an extra night’s stay for $50, and extended our return from 8am to 3pm for a further $30 ($15 each). In total it ended up being around, $460 or £350 for the 3 day trip for us both. This cost included lunch and dinner on the first day, all 3 meals on the second day and breakfast and lunch on the third.

There’s lots of stuff online about the 2 hour car journey from Panama City and yes, the second half is very long and winding and nauseau inducing so be prepared for that. On the way there our driver was very speedy and kept the windows open which meant it was okay, but the driver on the way home seemed to really drag out those bends and turns. But this part of the drive only lasts about an hour.Then there’s the boat ride – the night before we left we were told the weather was not the best, and that this could mean a windy and wet boat journey. It could also have meant rainy beach days so we almost cancelled but we’re glad we didn’t (more on this later). The boat ride was indeed choppy and we chose to sit in the back which we now know is a mistake, as after about thirty minutes of being waterboarded I arrived – a drowned rat in paradise. 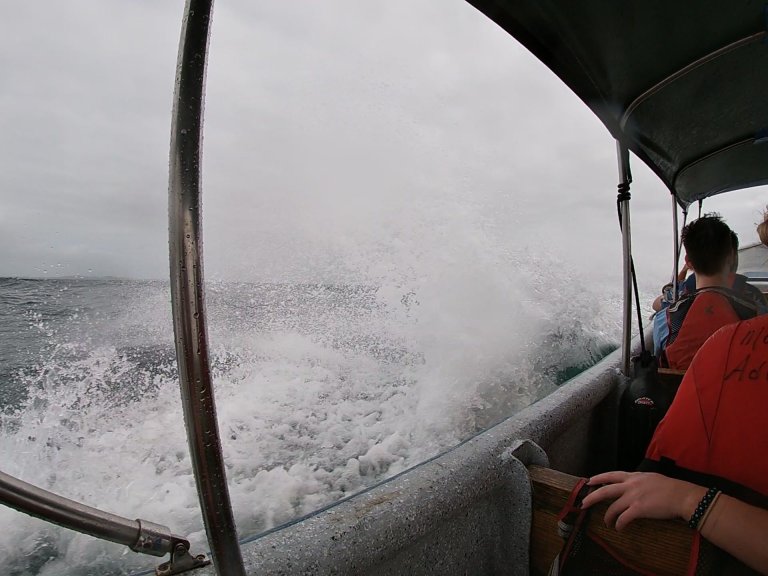 Which San Blas Islands to visit

We actually stayed on the beautiful Isla Diablo (Devil Island) in a lovely little hut with sea views. On our island there were two families, each who owned a number of accommodation cabins/huts, a small shop selling souvenirs and a small restaurant for the guests staying overnight. You are only able to walk around just over half of the perimeter of the island, as the other side is fenced off as private land and seems to be a growing space for the families. There was a small beach with some benches and volleyball nets, and the sea here was calm and good for snorkelling – with a small reef around 5m from the shore.

On our first day we visited Isla Perro Chico, the island you can see from Isla Diablo, where there is a shipwreck that you’re able to swim around. Although this island is within sight you wouldn’t be able to swim the distance as there are strong currents between the islands, which we experienced when looking at the shipwreck about 5m from the shore of Isla Perro Chico. This island was also stunning, and you are able to walk around the entire perimeter which only takes about 10 minutes. It’s a cool experience to walk around an entire island enjoying the views from all sides.

You can swim right up to the shipwreck and take a look, it’s only just below the surface of the water.

We also visited one of the “sunken islands”, like a sandbank in the middle of the sea that you can walk around on. The water is about waist height (a metre or so) and if you’re really lucky you’ll get to see lots of starfish here, but unfortunately we didn’t. It’s an unusual experience standing sort-of in the middle of the sea, looking around at surrounding islands and the boats parked up nearby.

Upon booking we were asked to note any dietary requirements. As I don’t eat much meat, and am never quite sure what to expect on tours and trips, I tend to select vegetarian (a vegetable is always a vegetable). However, when we arrived we were given the lunch options of; whole fish, fish fillet, chicken, chicken fillet. So I went with chicken fillet (as at least it would be white meat). This was actually quite tasty, and served with salad and either rice or boiled potatoes. However – I soon learnt that the same menu is served for all meals (excluding breakfast). I did try a fish fillet for one of the meals as I knew they were freshly caught and Frazer had tried it and confirmed there were no bones. Plus all the chicken and fish was battered and fried so didn’t really taste of much else anyway.I did hear one person persevere with ordering a vegetarian meal but I think they were just served the rice and potatoes with salad. So what I’m saying is – if you’re truly a vegetarian or vegan, you may need to consider taking lots of extra snacks with you. For me, I see my dietary options as a choice that I have the privilege of making, but in some of these places where they have very little it’s not a choice for me to make.

We chose a private cabin as it was not much more expensive than staying in a dorm room, and were expecting a sand floored basic hut. However, our cabin was actually raised with a wooden floor and had a little porch with a bench that overlooked the sea. There was a mosquito net but it wasn’t really designed for a double bed so we opted for bug spray instead. The toilets and showers were in a communal block about 10 metres away, and they were cleaned daily.

Is it worth visiting San Blas?

Overall our time on San Blas was amazing. We didn’t get to see a starfish, it was quite cloudy whilst we were there and the meals were repetitive. But at the end of the day – we were on a desert island. No WiFi, no worries. To be honest – the weather was perfect for snorkelling (no scorching sun on your back), and chicken and rice pretty much sums up the diversity of my regular diet. We realised whilst we were there that if we’d have added more nights on the island our trip would have been better value for money (as the main chunk of the expenses is the cost to get out there and back), but we felt 2 nights was just the right amount of time

Best bit – spending three days in what is probably the most beautiful place I have been in the world so far.

– spending three days in what is probably the most beautiful place I have been in the world so far.

Worst bit – being on the boat on the way there, blinded by saltwater and feeling very concerned about the type of screensaver I might be stepping into (worries which soon faded away).